In order to keep this page a manageable size, videos will be uploaded to YouTube for long-term storage. View all the videos we have uploaded here: YOUTUBE

Our First Thursday of the Month in-person meetings (every month except July) present timely discussions by prominent business people on events and politics affecting our local business environment. Pre-lunch networking gives you time to meet other Eastside business owners.

We provide civic and community information, development projects & politics of vital interest to residents and business owners in East Fort Worth.

No July meeting, but a concert instead

In honor of Teacher Appreciation Week, members of BLADE (Bell Leadership Association for Developing Excellence) professional organization, brought iced tea as a thank you for the continued partnership as BLADE’s adopted school.

BLADE has supported Bellaire Elementary for over 20 years and specifically supports their mentor program, the annual Campus Beautification Day and School Supply Drive in August. 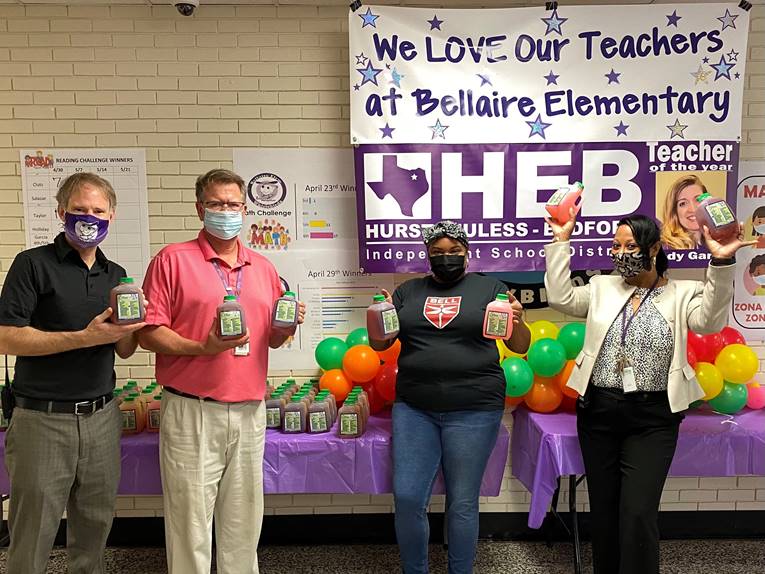 Along with bringing a tasty drink to share with teachers during lunch, BLADE also had the opportunity to personally thank Andrea (Andy) Garcia who won Bellaire Teacher of the Year and H-E-B ISD Elementary School Teacher of the Year! Andy is currently a 4th and 5th grade teacher at Bellaire Elementary school and has been a teacher there for 19 years. She also is a long-time community support liaison. 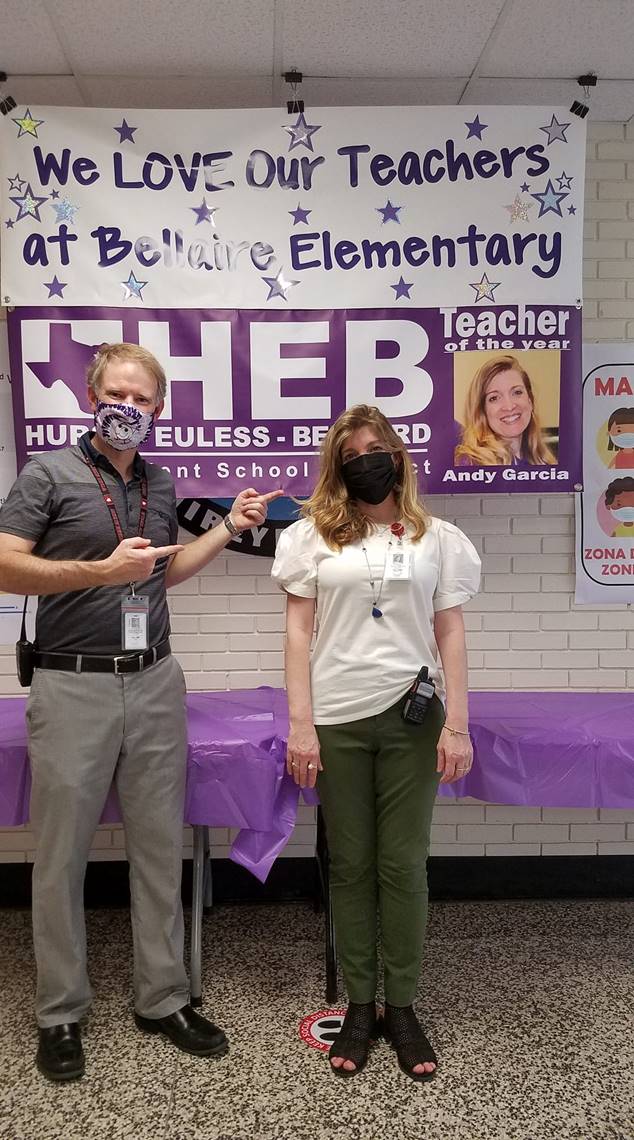 Pictured is Assistant Principal Benjamin Kirton and Teacher of the Year, Andy Garcia.

“Andy is super passionate about her students at Bellaire and enriching their learning experience by engaging with local businesses and non-profits. Andy has coordinated with Bell and BLADE for over 10 years to staff the school’s mentor program, organize BLADE’s annual Campus Beautification Day, and distribute school supplies from BLADE’s annual School Supply Drive.

We appreciate you Andy! Thank you for all you do for the students as Bellaire and congratulations on being awarded Teacher of Year!”

Sad news to report: Longtime EFWBA Board member Norm Bermes passed away in Sugarland, Texas (where his son lived) on Wednesday June 16, 2021.

Norm had been suffering from Parkinsons, and lived at home during the February freeze, and moved south to be closer to his son, when he was admitted to hospice in April.

Elaine Edmonds sent us this story about Norm:

FORT WORTH -- As the gold dots popped up on the screen, each one representing another active shooter situation in the United States since the year 2000, people took notice.

"It's almost like we're just expecting it," said 83-year-old Norman Bermes. "We were here today preparing to react to the next situation."

Bermes went to civilian active shooter training in Fort Worth Saturday with one major question.

"I'm carrying a gun in a shopping mall, and I hear shots. What do I do?" he asked.

The answer is threefold according to the presentation given by the Fort Worth Police Department. First, you avoid the action entirely by getting out of the area. 'If you can still see the building, the shooter can still see you,' the class was told. If it's not possible to get out, you deny the shooter access to you by using barricade techniques: turning off lights, locking doors, etc. Then, if it comes to it, you defend yourself by any means necessary.

Bermes brought an interesting perspective to the class. He was pinned down in one of Texas' most famous and earliest active shooter situations, the University of Texas clock tower shooting in 1966.

"I would step out like I was going to go help somebody. Then I'd step right back and a rain of bullets would come right down," he remembered. He said he used the tactic over and over, hoping to distract the shooter long enough to protect other lives. He was 33 at the time and Saturday he learned a new tactic.

"When the uniform (Police) shows up, drop your gun so that you're not the bad guy," he said before adding, "but until they get there you're the one that's going to have to secure the situation. I always say I hope the shooter has bad aim because I'm never going to shoot first, but if it comes to it all bets are off."

A valuable lesson, but one that hopefully Bermes or anyone else will ever have to use.

Jarred Howard is Government and Public Affairs Lead at Bell.

In 2006, Jarred commenced a 12-year stay at BNSF Railway, where he led a team in the Consumer Products business unit before assuming leadership of their economic development efforts in the southeastern U.S. In 2018, Jarred was recruited as senior vice president - Entrepreneurship at the Fort Worth Chamber of Commerce.

Jarred spends most of his personal time with his wife, son, and daughter. Jarred enjoys brand-building, serving in his local church fellowship, and the Dallas Cowboys.

The pages advance every 6 seconds. There is no audio with this slide deck.

IN PERSON with LUNCH!

Lunch Sponsored by our friends at:

Our May Guest Speaker is the new Chief of Police, Neil Noakes.

Chief Neil Noakes has been with the FWPD since 2000. He has served in multiple ranks across the department in areas such as Patrol, DWI, Motors, and Internal Affairs. Prior to being named Chief of Police, he oversaw the South Command as Deputy Chief.

He is a graduate of the Southern Police Institute’s 137th Administrative Officers Course and TCU’s inaugural Leadership, Executive and Administrative Development program (L.E.A.D. #1).

He also enjoys working with youth engagement programs such as Operation Progress, Read2Win, All Pro Dad and the City of Fort Worth’s Education Initiative.

Election Day is Saturday May 1.

Eleven candidates submitted papers to be on the ballot for the 2021 Mayoral election.

Each candidate for mayor was given an opportunity to answer this questions from our organization.Their responses are on the Candidates for Mayor page. The six candidates that answered our question were invited to be guest speakers at the April Zoom meeting.

Five of the 11 candidates joined EFWBA for a Mayoral candidate question & answer session. Attending the April 1 meeting were Dr. Brian Byrd, Daniel Caldwell, Mattie Parker, Deborah Peoples and Ann Zadeh. Mylene George submitted her response to the questions we sent each candidate, but was not at the Zoom meeting.

Text from this text stream will be included on the website: https://efwba.org/CandidateForum2021.html

A recording of this meeting will be on the Past meetings page: https://efwba.org/pastmeetings.html

Dr. Powderly feels privileged to have cared for children and families in the Fort Worth community her entire career. Listening to parents and partnering with them in the development and health of their children is essential to her practice.

Dr. Powderly earned her undergraduate degree from the University of Dallas where she graduated Phi Beta Kappa. She then completed medical school at the University Health Science Center at Houston. In her residency at Austin Medical Education Program (Dell Children’s), she was selected as chief resident for her leadership and communication skills. Serving on multiple community and hospital committees has enabled Dr. Powderly to understand the broad spectrum of caring for children from home to hospital.

Community service has always been an integral part of her life. Whether it involves teaching Sunday school to first graders or serving as president of the local nonprofit organization Fort Worth SPARC. She has served on the PTA and school boosters from elementary to high school.

In her free time, Dr. Powderly enjoys reading and hiking with her husband and teenage son. She’s also earned a black belt in Taekwondo.

Due to technical problem, this meeting was not recorded, but we do have the presentation slides.

The Raise Your Hand Texas Foundation is a 501(c)(3) nonprofit organization that supports programmatic initiatives structured to identify, pilot, and scale systemic improvements in public education.

Outside the legislature, Matthew spearheaded numerous coalition-building and grassroots advocacy initiatives across Texas and the American Southwest and has contributed his expertise to several leadership development programs, including the North Texas-based Latino Center for Leadership Development. Additionally, he served as a communications and policy advisor to the Board of Hispanic Caucus Chairs, a national nonprofit consisting of bipartisan Latino state lawmakers in positions of legislative leadership.

A Fort Worth native and third-generation Tarrant County resident, Matthew is excited to work with lifelong neighbors to advance public schools. He enjoys a good game of paintball and exploring Fort Worth's museums.

"A man cannot live off his community. He must live with it." – Amon G. Carter